To Mount the StringWeaver on the Mains 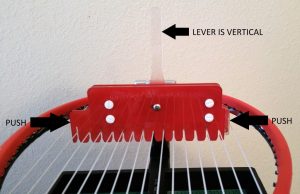 2. Move lever to the vertical position.

3. Center the StringWeaver over the main strings and push it onto the mains until it seats.*

4. Slide the Comb to the right to capture the mains by pushing on the lower left and right edges as shown in the bottom photo.

5. Rotate the lever to verify that the captured main strings have been properly latched and the strings separate when the lever is moved.

6. Begin weaving the crosses.  Rotate the lever after each cross to reverse the weave.

*There should be one string in each of the comb slots.  You may need to re-position some of the mains slightly (up to 5 mm or 3/16 inch) to align with the slots in the comb.  Don’t worry, the mains will return to their original position when you remove the StringWeaver.